Sometimes, I am labelling myself as a “queen of side projects”. Basically that means, that I am curious and my main research projects are sometimes not well suited to answer other questions I might have. A lot of the times, I can answer these questions by reading. This is always fun, and always worthwhile.Other times, the answers to my questions just have not been found, yet. Cue another side project. At other times, you’re discussing ideas with friends and colleagues, and someone says “we should do something in this area!” – be aware, I’ll take this seriously, and write follow-up emails to plan for this “something”. Whoops, yet another side project. Some people wonder how it happens that they once again bought books without really meaning to (or, is this also just me?

At one of the centres for knowledge, surrounded by amazing opportunities for research, for connecting with other academics, for reading academic stuff, but also literature (in Oxford, you really can’t miss that Philip Pullman wrote another book from the world of His Dark Materials) and for engaging with knowledge in the broadest sense. I have to admit, I am a bit overwhelmed.

I managed to have a few enjoyable discussions with other academics, engaging with their work and thinking about different stuff, just not as much as I would like, and not as intense as I usually experience it during conference season.
I managed to read a bit, but nothing from beginning to end, so more of a browsing through. I bought books – ok, I already bought a lot of books and now my tiny book shelf here in my Oxford flat is already full, and I need to think about what to do about it. I mean, I could read some of these books, and then just send them home to Germany where I have larger bookshelves (though, also quite full – if anyone knows how to implement the TARDIS/Mary Poppins’ bag/Hermione’s bag technology or magic into bookshelves, please let me know!)
And I even managed to do some research in a few of my projects, joined a writing partnership (shout out to Stephen, sitting beside me and working on an important chapter) which definitely helps to keep on track with Deposing Monarchs, and I am now preparing my first funding application for an event I am hoping to host here in Oxford.

I can’t even imaginge writing an academic text without any literature software. In particular, I am using Citavi which is also the reason why I am not changing to a Mac. The only reason!

It is especially helpful when changing citation styles – this is literally done by clicking a button. And since I am still getting the hang of Chicago Style, nevermind all the other ones, I am pretty thankful not to need to think about this. German citation styles differ as well, even between disciplines. In book studies, I got used to also including the publisher which you usually don’t do when writing German historiography, and which you once again do in English historiography. Honestly, it does make a difference if something is published by Random House and therefore aimed at a more general audience, or by an university press, therefore, I prefer to include the publisher.

Aside from citation styles and the automatic generation of the bibliography – even fancy ones which automatically separate sources from research literature -, the most important things in my literature software are all the many possibilities to sort titles.

At the moment, I am re-writing the chapter presenting the case studies, including cutting most details needed for the German dissertation out of the upcoming monograph. I’ll try to roughly work parallel on the editing of the German publication and the re-writing of the English monograph, and I am now coming to the end of the Scandinavian case studies.

So, what brought me to include the Scandinavian kingdoms into my research? England and even Scotland were pretty clear, the English even have a reputation for being “king-slayers” – it’s a bit undeserved; usually they deposed their monarchs first, or more precise, forced them to abdicate – afterwards, they killed them, so it should be something like “ex-king-slayers”? But even the English with all their depositions from 1327 (Edward II) right through the Wars of the Roses and until Charles I and James II in the 17th century, do not hold a candle to the Swedish.
Very early on, it became clear that if I want to understand deposition, I have to include Sweden. If I counted correctly, from all the kings between ca. 1350 until 1600, only three were not deposed. Plus Margaret who ruled but was never crowned.

Writing a dissertation vs. writing an academic monograph

What I really like about the chance to rewrite my German doctoral thesis as an English academic monograph is the possibility to re-structure the book, and to make it about the reader (hopefully, some people will read it…). When I started the PhD journey, I took my time researching and later on, writing and researching. While writing, new problems turned up, details were unclear (to me), and more research and more reading needed to be done. In the end, the German dissertation shows this thought process, no matter how many times I edited. I can still tell which parts I wrote first, and where I already found out where this writing is going. Maybe you can see this as well when reading the German (Open Access) version.
First of all, there were the usual expectations to a doctoral thesis on an extensive literature and methodology review, detailed source interpretation, and broad contextualising (incl. to place the own research in research fields which turned out to be not that relevant for my work). I am grateful that I spend quite a lot of time on this, and especially on the introduction where I summed up relevant research on the vast field of “Herrschaft” (authority, rule, government, power…) and political history (incl. political thought or history of ideas) and really dug deep to also form my own understanding of power, authority, and rule in the early modern period.

The last post was about publishing with English publishers, written in German for a German audience… To make it even, this will be about the German academic publishing system based on my experiences with it. My first two co-edited volumes were both with a German publisher (transcript) although one of them was in English.

Furthermore, I had book chapters published, and I am planning on publishing the dissertation in Open Access via the university server.

And that is one specialty of the German academic system which – in my opinion – leads to many other idiosyncracies for publishing here. A doctoral thesis has to be published before the doctoral candidate can use the title “Dr.”!

Writing, Editing, and Publishing Two Books at Once

Actually, it’s the same research but it will be published in two different books – the German dissertation which needs to be published to fulfill all requirements for the title “Doctor”, and an academic monograph, published in the Routledge Research in Early Modern History series. The research on depositions of monarchs on the British Isles and in Scandinavia, 1500-1700, has now been part of my daily life for ten years (although I did submit in 2016, and defended in 2017). It really is time to share then complete work with the academic community. Parts and ideas of the whole had been presented in journal articles, book chapters, and uncounted conference presentations, but now it’s time to publish it – let it leave the nest, take flight…

But first, the German version has to be edited: I need to include comments from my dissertation committee, add some of the new research to it (a few books which I could only reference as “xyz is working on this right now” are now published, and can be referenced properly), shorten the whole thing a bit, put some of the ideas which I presented in footnotes in the main text, add the acknowledgements, and finally, check everything again in regards to citation, format, the next-to-last typos (the last typos are only found after publication – it’s an unwritten rule of publication), and make it pretty.

The German version is around 200,000 words (400 pages), so it will be lot but doable.
At the same time, I am also re-writing the research into an (English) academic monograph with only half of the words (aiming for c. 110,000 words). Because, let’s face it, my audience will mostly come from scholars interested in British and/or Scandinavian history, and they prefer often English over German.

The project Memory Boxes. An Experimental Approach to Cultural Transfer in History, 1500-2000 has come to its happy end: 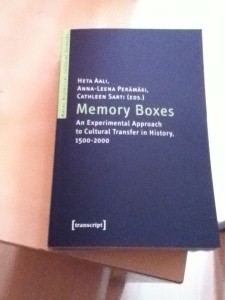 This project between the Cultural History Department at the University of Turku, Finland and the Research Unit Historical Cultural Sciences at the University of Mainz, Germany started in 2010, when a group from Mainz (myself included) visited Turku and got to talking about cultural transfer/cultural encounters. Until it all really came together – finding the participants, finding a concept which promised some new insights into our research topics, and applying for funding from the DAAD (Germany) and the Academy of Finland, it was already late 2011.

2012 and 2013 saw us visiting each other twice a year, and really struggling with applying theory to the actual research. After all, the theoretical concept was supposed to add something to our projects. However, at the end of 2013 our articles, introductions and conclusion was finally done, and we (myself together with two lovely colleagues from Turku, Heta and Anna-Leena)  brought our book the last steps to be published. And now, it’s finally here!

Now, what is it all about?
Basically, our project group of ten people used the concept of memory boxes to be able to take a closer look at cultural transfer through time and space. A memory box is identified as a material or immaterial object (we used the categories topoi, personalities, and artefacts) which is encountered in different cultural contexts. Different meanings are attached to such a memory box in every different cultural setting, while at the same time, the older meanings still influence their interpretation. Therefore, a memory box helps us to understand a cultural setting by taking into account older influences.

Alright, alright – this sounds very abstract. To make it a bit concreter:
my case study was the development of the topos providence in 16th- and 17th century England as well as 17th- to 20th century America. It could clearly be stated, how this topos changed from a religious to a more political concept. In England, ideas of Protestant heroism – a sense of England as the Protestant nation – were attached through claiming the defeat of the Spanish Armada, the discovery of the Gunpowder-Plot, or the Glorious Revolution as providential. In the American colonies, shared experiences of settling a new country made up the basis of the understanding of providence. This understanding added to an American sense of being the foremost Christian nation.
In both cases, providence was not only understood as a religious idea of God’s hand in the world, but much more a political idea linked to national identity.
The concept of memory boxes made it possible to concentrate on this topic in isolation, and really grasp the different influences which played a role.

I admit, this propably still sounds very abstract. However, our project also looked (among others) at the Kalevala (a Finnish epic poem), representations of the Merovingian Queen Clotilde, the topos of Golden Age, or the coronation stone of the Scots as memory boxes.

All in all, I think it was a worthwhile project – and, it definitely opened my eyes for all these different circumstances where cultural transfer plays a role, and how it influences everyday-life.