Rezension: M. E. Sarotte – Not one inch. America, Russia, and the Making of Post-Cold War Stalemate

M. E. Sarotte - Not one inch. America, Russia, and the Making of Post-Cold War Stalemate (Hörbuch)

CfP: HistorioGRAPHICS. Framing the Past in Comics 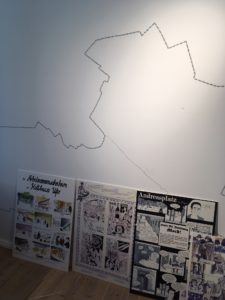 The conference aims to bring together the fields of history and comics studies more closely to deepen our understanding of visual representations not only as primary sources but also as a format of historiography. We emphasize the transnational approach to this topic, in the stories told as well as in the research about them, with a particular emphasis on the transatlantic perspectives.

Over the past decades, the academic study of historiographical as well as documentary and journalistic comics has become an established field of research. Pioneering comics researcher Joseph Witek argued in his study Comic Books as History (1989) that the (re-)presentation of the past in comics has been an integral element in the early transformations of comics culture during the 1970s that initiated the advent of the graphic novel. Since Art Spiegelman’s 1992 reception of the Pulitzer Prize for Maus, comics have received wider public attention and nonfiction graphic narratives can be considered a notable element of Western media culture, with historical events among the most prominent topics they explore. In fact, Maus has become such an established part of the teaching canon by now that it even found itself caught up in the culture wars after a Tennessee school board voted to remove the book from its eighth-grade curriculum, sparking international backlash.

Most recently, the continued transnational interest in documentary graphic narratives was visible in the awarding of the German Geschwister-Scholl-Preis in 2021 to Joe Sacco, another renowned U.S.

This text examines the role of stereoscopy in the 30-minute film poem “1:1” (Germany 2021, Telemach Wiesinger).