The Role of History and Memory in Contemporary Chile

How much has Chile, as a society, learned from the violation of human rights under Pinochet’s dictatorship?

The post The Role of History and Memory in Contemporary Chile appeared first on Public History Weekly.

Book Review: “Our Voices, Our Streets” 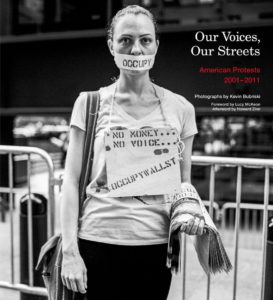 Protest is a form of expressing one’s opinions. It allows people who share the same view(s) to rightfully assemble with others to voice complaints and ideas. Bubriski’s book, “Our Voices, Our Streets: American Protests 2001-2011”, looks back at that decade through photographs united by common denominators: the lens of the Hasselblad camera and the public stage of the American streets.

Since the country’s founding, the American streets have been vibrant spaces for political and cultural expressions. They have also been places for demonstrations and protests. The First Amendment of the United States’ Constitution protects freedom of speech, religion, press, assembly, and the right to petition, and prohibits any restriction of private and non-governmental persons and entities.

The first decade of the 21st century was marked by political, social, and economic events that made the American Streets a public platform for demonstrations.