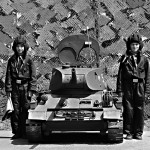 When Hungarians protested against their socialist government and the rise of Soviet influence on domestic policies in 1956, West German photographer Rolf Gillhausen spontaneously drove his car to Budapest and soon returned to Hamburg, where his photographs were published by the West German Stern magazine. Twelve years later, Czech photographer Josef Koudelka took pictures of the Prague Spring events and sent them to London where Magnum Images distributed them all over the world. Starting in 1974, Thomas Hoepker, who would later become president of Magnum, worked for Stern magazine in East Germany, although GDR authorities openly rejected his images because they painted a rather unflattering picture. In turn, the GDR’s ADN-Zentralbild sent its staff out to document political life in the Federal Republic. Western editors bought the images of Eastern photo agencies like Zentralbild, MTI, and TASS, while Eastern editors bought those of AFP, Reuters, or AP Images. At the same time, Hungarian picture editors reprinted photographs published by Western magazines without even clearing the rights or paying fees—a practice which they laxly called “scissor journalism.”

In many cases, personal contacts between individuals enabled an informal exchange of photographs and ideas. Robert Capa’s visit to the Soviet Union (1947), Henri Cartier-Bresson’s visit to East Berlin (1962), and East German Ute Mahler’s trip to Cologne and Paris (1978) show that photographers traveled eastwards as well as westwards. East German State Security reports give evidence that many freelance photographers in the GDR were permanently in touch with colleagues from Western countries.

Photographing Asia: Images of Russia’s Orient and the Far East in the 19th and 20th Centuries